Two male snakes took the meaning of a hissy fit to a whole other level when they went head to head over mating rights to a female.

The two carpet pythons were found by stunned home owners in southeast Brisbane, after they were wrestling so much that they fell off the roof in Redland Bay. The snakes were locked in combat pushing each other’s heads down when the residents put a plastic container over the frisky fellas and called Logan snake handler Grant Browne.

Mr Browne said the mating ritual battle, which is commonly seen at this time of year when the weather gets warmer, ends when the weaker, and usually smaller one of the two snakes back down. 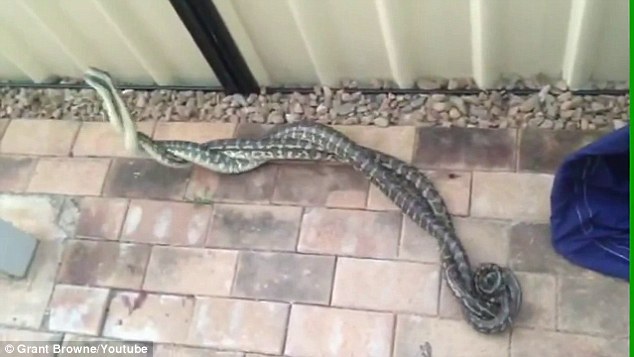 Mr Browne said there would have been a female snake nearby even though he searched the roof but couldn’t find her.
He warned not to go near snakes even if it was to contain them until a snake handler arrived.

‘Unless you are really sure whether they are dangerous – you should never go near them because it could be a red belly or a brown snake which would not end well,’ he told Daily Mail Australia. 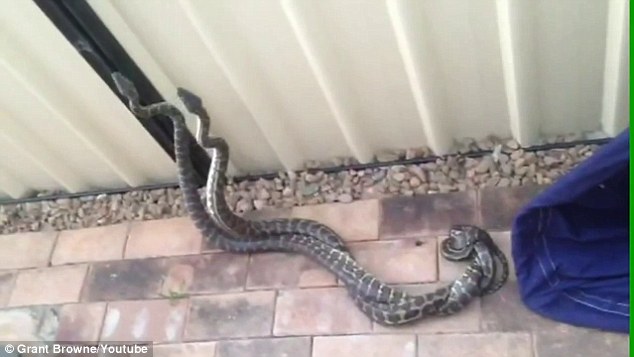 ‘Just keep an eye on them from a distance while you call us.’
Carpet pythons are not venomous although they about 100 teeth to give you a decent bite.

‘I’ve been bitten by them – they hurt a bit and bleed a lot but they are not dangerous,’ he said. ‘It’s the pets you’ve got to worry about like small cats and dogs.’ 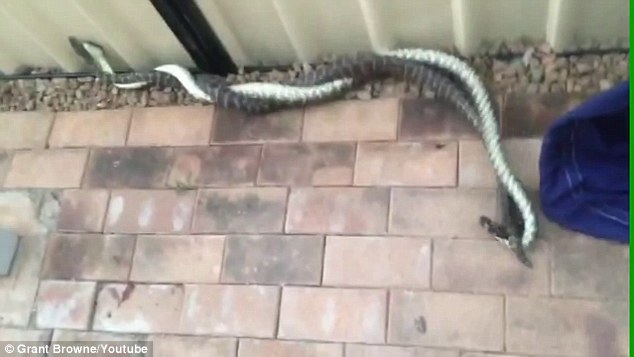 ‘Guinea pigs are a common one because people don’t seal the cages properly,’ he said.

‘The snake gets in the cage and eats the guinea pig but can’t get out because it has a full tummy – the same things happens with chicken coops.’

Most Unbelievable Cast Net Fishing For 280KG River Monsters…(Video inside)

So Amazing! Banana tree from the time of the Buddha, more than ten meters high

A group of villagers caught a rare giant catfish…(video insider)

The king snakes mate in the middle of the road, causing traffic jams…(video inside)